We no longer hold historical information at the Estate office after a 2019 project, led by the North of Scotland Archaeological Society (NOSAS) to document and archive the majority of historical records and maps. If you would like to know more or have a particular query then please get in touch with the Highland Archive Centre.
Links
Highland Archives Centre
NOSAS
National Library for Scotland
National Library of Scotland: Copyright Copyright for commercial re-use of digital maps
Example map of Beauly

History
The Fraser family first settled in the Aird during the 13th century. Sir Simon Fraser of Oliver acquired the Bisset Lands around Beauly when he won the hand of its heiress, a young Bissett. King Alexander III granted the right of the “Lordship of Loveth, vulgo Morich,” in the Aird, in 1253, [10][15] and the corresponding lands, to Simon Fraser of Lovat, either his son or cousin, from whom the Clan Fraser claims descent.
The current Simon Fraser Lord Lovat is the 25th Chief of Clan Fraser and the Lovat Estates have been in existence in some form or another ever since that time. History books show that from around 1407-1818 the estate was run at a loss which resulted in sales of large areas of ancient Fraser lands over the centuries, culminating in the confiscation of all lands and titles after defeat at Culloden in 1746.
After Culloden the 11th Lord Lovat was convicted of high treason for the second time in his life and became the last ever peer of the realm to be beheaded in the UK. His son, also Simon Fraser, escaped punishment by the English and went on to raise a Fraser regiment for the British army which fought valiantly in Canada in the 1750s alongside General Wolfe. As a result, in 1774 some of the forfeited Lovat estates were granted back to him by an Act of Parliament in recognition of his military service to the Crown. The Estate was entailed during the early part of the 19th century for a period, but we have chartularies showing lands at Fort Augustus amongst others being sold commencing around 1885. In 1994 the estate was largely broken up to pay down debts incurred by the Master of Lovat of the time but has since that time consolidated and is slowly being rebuilt by the current Lord Lovat. 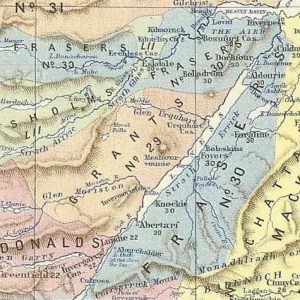